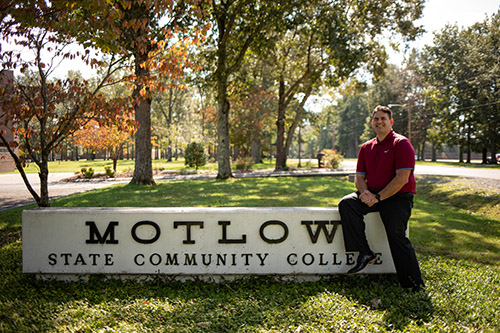 “I used to be a powerlifter; I could squat 800 pounds, deadlift 700, and bench 600,” said Dr. Anthony Ervin, a physical therapist at Vanderbilt Tullahoma-Harton Hospital and a 2010 graduate of Motlow State Community College. “I was strong, but I was also morbidly obese; I weighed about 450 pounds at that time.”

During his time as a weight lifter, he was known to his friends as “Big Erv.” He once was able to win state championships and set records.

Around 2 a.m. on January 6, 2007, Ervin was driving home after a friend’s birthday party when he passed out and his truck struck a tree. Before that night, he had experience as a plumbing journeyman and was looking into college to become an engineer.

“That night everything changed,” he said. Ervin had not been wearing his seatbelt, and when his vehicle impacted the tree his door was opened and he was partially ejected. He vaguely remembers being somewhat under the truck and his left leg under the steering wheel.

A couple who lived across the street from where his accident occurred called for help. He was life-flighted to Vanderbilt Hospital.

“I don’t remember much about my time at Vanderbilt,” he said. “But I lost over 100 pounds in four weeks.”

At 30 years old, Ervin was diagnosed with a traumatic brain injury that affected his speech, he was unable to walk, and was permanently blinded in his right eye due to the accident.

In February 2007, he was transferred to Life Care Center in Tullahoma for rehabilitation. He went back to Vanderbilt to treat a decubitus ulcer and eventually to Vanderbilt Stallworth Rehabilitation Hospital in Nashville, where he says things finally started to turn around.

“There, I was able to start walking again,” he explained. He also underwent speech and occupational therapy. “If I didn’t have friends and family, I never would have made it.”

He recalls his mother being with him the entire time and attempting to talk him out of hallucinations he was having while there.

“I would watch a movie and then I thought I was part of it. I thought I was Harry Potter’s friend and I had to help him,” he explained. “I see it in patients now when they are in a similar mental state. The best thing to do is to try and stay calm and be understanding. Try to get their attention to something else.”

He also recalled watching a lot of Smallville and getting really into Superman. His nickname now is “Super Erv.”

“I had so many issues at the hospital. I shouldn’t have made it. The doctors told my parents that I had less than a 10 percent chance of survival,” he explained.

In April 2007, he started rehabilitation at home but found that it wasn’t as helpful as he had hoped. So, he went to Vanderbilt Tullahoma-Harton Hospital in Tullahoma to continue his rehabilitation and was there from April until June.

He said his uncle gave him his old truck for his 31st birthday that year.

“My dad started retraining me to drive. We drove around parking lots at first. Luckily it came back to me quick,” he said, adding he was initially hesitant to drive and admitted that he would get nervous in heavy traffic due to the loss of vision in his eye.

He is incredibly thankful to his parents, step-parents, and friends Jeff Brandon, Kyle Grover, and Brent Tracy. “They were all very supportive,” he said. “Without them, who knows where I would be right now.”

As he continued to recover and was in and out of hospitals and rehab facilities, he thought about going back to school. He said his step-mother suggested he study physical therapy.

“With my background in weight lifting, I thought it might be a good fit,” he said. “I am physically capable of lifting people up better than others because of the strength that I have.”

He enrolled in one course at Motlow State in the Fall of 2007. It was an online history course that he could complete while going back and forth for checkups, surgeries, and of course still lifting weights.

In Fall 2008 he was able to enroll full time at Motlow, working toward an Associate of Science degree in Pre-Physical Therapy. He recalled being able to lift about 300 pounds at that time.

“School gave me something to do,” he explained. He excelled at it, especially science. He graduated in 2010, and was awarded as the College’s Science Student of the Year. 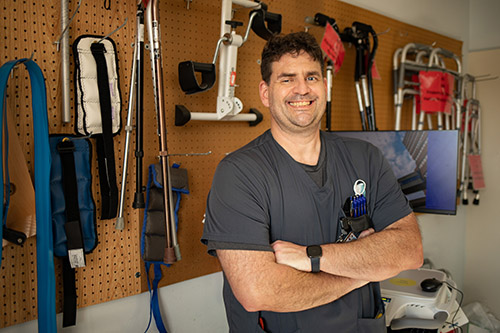 While at Motlow, Ervin met Belinda Champion, who was a state vocational rehabilitation counselor at that time. Coincidently, Champion is now the director of Disability, Testing and Counseling Services at Motlow.

“Belinda was a godsend,” he stated. “She helped me with vocational rehab, helped me get books, financial support, career training, guidance and more. She went above and beyond to help and look for things that could help.”

“From the time I started working with him, he knew where he was going and never looked back. I was just along for the ride,” said Champion.

Ervin said Champion continued supporting him even after he graduated from Motlow and pursued his bachelor’s degree at the University of Tennessee in Chattanooga (UTC).

“Belinda and Motlow have always been incredibly supportive,” he said. “She always reminded me to ask for help if I needed anything.”

“Anthony has been an inspiration to me since the first time we met about his career goal. It was one of those moments that I knew I saw true success in motion,” explained Champion. “His drive made me want to walk his journey with him and I had the honor to do just that as a vocational rehabilitation counselor. I had the privilege to be a small part of supporting his journey in education to arrive where he is today. Anthony created his path to success and some of us were very fortunate to be along with him on the ride to offer support. I am honored I was chosen to be on that ride.”

It wouldn’t be until 2010 that he was finally granted financial disability compensation.  He was motivated to see that as temporary assistance and he leaned into college as a means to change his future.

“During that time, there were not any available jobs that I could do related to my prior experience and my injuries. I had to go to court for a judge to grant the disability benefits,” he said.

“I was always up front with my teachers about what all I had going on,” he explained. “I had a tutor to help me with spelling and pronunciation, to be proactive in my own recovery and studies.”

Ervin credits the vocational rehab that Champion helped him get started with for helping during this time.

“Vocational rehab helped me with driving back and forth, paying for supplies and housing costs during my rotations, which took place in Rome, Ga., and Johnson City, Tenn.,” he said. “The Student Support Services at Chattanooga helped with tutors and counselors as well.”

Part of Ervin’s clinical training included a rotation at Vanderbilt Tullahoma-Harton Hospital under the direction of Noi Fraker. Today, Fraker is his supervisor at the hospital.

“Super Erv is a great clinician! His disabilities have not hindered him in anyway. He is hard on himself because of his injury but he doesn’t let anything stop him,” said Fraker, who is the director of Rehab Services and the Wound Care Clinic at Harton.

“It is commendable that he went from being someone they thought wouldn’t survive to putting himself through school. He is one of the best you will find,” she said.

Ervin initially began working two days per week at Therapy Works in Winchester, until Harton called. Then he worked at both for a while before going full time at Harton.

“I have been fortunate to have the best bosses I could’ve had. They have been very supportive and have put up with my emotional roller coaster,” Ervin said. “You can’t let anything hold you back; you have to push your limits. If you don’t think you can, then you won’t.”

Having been through a traumatic experience himself, he feels that he is better able to assist patients that come through the door. He continues to lift weights, although not at the same level he once did. As part of his own pathway to a new sense of normalcy, his service to others was matched with a return to weight lifting. Together, helping others and strengthening his sense of self served as important markers of his own recovery.

“I can see where patients are coming from and see what they need to do. So many say ‘I can’t do that’ and I encourage them to try,” he said. “Sometimes I push too hard, and remind myself that what one person, or even myself, is capable of, may not be the same for the next person. But I never let them give up. I get them as independent as they want to be.”

“His understanding from his own experiences makes him more driven to improve a patient’s quality of life. He understands it better,” Fraker seconded.

In October, Motlow observes National Disability Employment Awareness Month. Motlow pays tribute to the accomplishments of members of the labor force, like Ervin, whose work stands as a testimony of the important role education can play in rehabilitation. The College honors all who work to ensure equal opportunity for every level of ability, and celebrates the many and varied contributions of America's workers with disabilities while championing everyone’s right to identify roles that contribute meaningful service to our state and our nation.

“Find things that can help you. Don’t let what you are going through weigh you down,” said Ervin, who proudly returned to squat and deadlift about 600 pounds and bench almost 400 again during his time in school. “Since returning to work I have not been in the gym like I should and have lost some strength.”

Students with disabilities who would like to apply for accomodations should contact the Smyrna campus at 615-220-7857, or all other campuses at 931-393-1765, or any campus by email to [email protected].