Nominated by Motlow State Community College, the Town of Smyrna was named as one of four Regent's Award winners; and Dr. Sam H. Ingram, Motlow’s first president, was named among the 13 Chancellor's Award winners.

TBR created the two awards to recognize outstanding accomplishments in fundraising—honoring individuals, companies, and organizations who go above and beyond to donate their resources, finances, and personal time to TBR colleges. 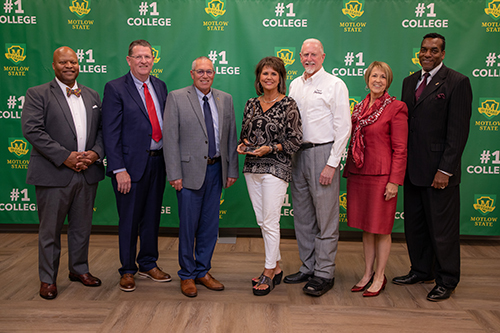 The Regents Award for Excellence in Philanthropy is for visionaries, statespersons of the community, employer and workforce partners, and regional leaders.

The Town, along with the late Mayor Bob Spivey, paved the way for Motlow to have a dedicated Rutherford County location. Recognizing the value of higher education, Smyrna donated 14.34 acres for the first campus building in that area, which is approximately 17,500 square feet and was named in honor of Dr. Arthur L. Walker, Jr., the College's fourth president. The building opened in 2006 and was filled to capacity in the first year.

"The Town of Smyrna and Motlow quickly determined there was a need for a second building," Torrence explained. "So, in 2010, the Town once again donated land to assist with a second building that was named in honor of Motlow's fifth President, Dr. MaryLou Apple, and opened in 2013."

A third building, an 83,000 square-foot facility named the Hyatt-Spivey Center, was established in 2018. In addition to the much-needed space, Smyrna has championed the pathway for citizens in Rutherford County and surrounding areas to obtain a quality higher education locally.

Past and current Town of Smyrna administrators and staff continue to be instrumental in supporting the College at various functions and events, both professionally and personally.

"The Town has contributed in all facets of fundraising for the college, including participation in capital campaigns, the Motlow Gala and golf tournaments, student scholarships, special events, and unrestricted giving," said Torrence. "Smyrna is an advocate for higher education and exemplifies the meaning of philanthropy." 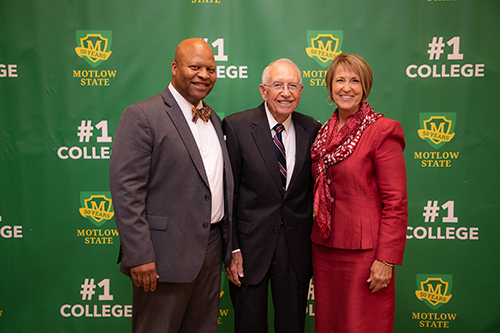 The Chancellor's Award for Excellence in Philanthropy recognizes an individual or organization that has given special assistance to at least one TBR institution.

Murfreesboro resident Dr. Sam Ingram is a former president of Motlow, serving from 1969 to 1974. He helped get the College off the ground and presided over Motlow's first commencement in 1971.

"Dr. Ingram has been an enduring voice of support for Motlow State Community College for decades through his presence, his gifts, his service, and his wisdom," said Torrence.

In 1990, he joined the Board of Trustees for the Motlow College Foundation. He is on the Executive Committee and the Investment Committee for the Foundation and serves as Chair of the Foundation's Nominating Committee.

In celebration of his 90th birthday, he lent his name to a fundraising campaign that raised critical funds needed for book scholarships. This campaign was in addition to the nearly $30,000 he has personally donated.