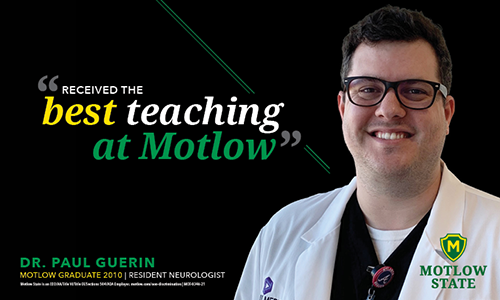 My name is Paul Guerin, and I grew up in Fayetteville, Tennessee, and attended Lincoln County High School. My first educational exposure to Motlow State was in a dual enrollment pre-calculus class as a high school senior. I immediately liked Motlow.

When it was time to make my college decision, I knew that I didn't want to saddle myself or my family with excessive school debt. I was lucky enough to be offered the Presidential Scholarship from Motlow, and it was the perfect opportunity for me to get an education and not go broke doing it. At Motlow, I earned an Associate of Science degree in Biology. I took most of my courses at the campus in Moore County and some summer courses at the Fayetteville campus.

I had many great instructors and fantastic classes at Motlow, but I’d have to say my favorites were Bob Reeder’s biology classes and Dr. Scott Cook’s history classes. They were both terrific teachers, and it was clear that they had a real passion for their content areas and teaching. During my time at Motlow, I was a part of the Student Government Association and Presidential Student Leadership Institute.

After Motlow, I attended the University of Tennessee-Knoxville, where I earned a Bachelor of Science in Biology with a concentration in Ecology and Evolutionary Biology. After completing my undergraduate degree, I was sure that I wanted to work in science or science education, but I wasn't sure where. I attended the University of Alabama in Huntsville, where I earned a Master of Science in Biology.

It was at UAH where I found my path to be medicine. I volunteered at Huntsville Hospital and set about the long process of applying to medical school. I had a gap year after graduate school while I was interviewing for medical school. I was fortunate enough to have the opportunity to teach biology and anatomy at McGavock High School in Nashville, where I also helped coach the boys’ basketball team.

After my teaching year, I enrolled at Lincoln Memorial University-Debusk College of Osteopathic Medicine in Harrogate, Tennessee, where I earned my Doctor of Osteopathic Medicine degree. I am now a medical resident in neurology at Southern Illinois University in Springfield, Illinois. I’m not sure what type of neurology I want to practice now, but I’m excited for what the future holds.

As someone who has experienced a fair amount of education at various levels, I feel confident saying that Motlow stands out to me as the institution where I received the best teaching. While large institutions can offer a great deal in terms of resources, it’s been my experience that the primary objective for many programs at those large institutions is not teaching. Their primary focus is to be published, earning grants and recognition for the school. This results in students relying on a great deal of self-guided study to earn a degree. I feel that self-guided and self-motivated study is essential for any education. Still, I never understood paying large amounts of money or going under substantial debt burdens just to perform a self-guided study.

I loved Motlow because the instructors were there to teach in the purest sense of the practice, and they can do this because they aren't pressured to “publish or perish.” I can honestly say that the courses I took at Motlow were every bit as rigorous as courses I took at other institutions. I enjoyed them more because I had instructors who actually cared about teaching.

I am happy to answer any questions about the medical school process. Please contact me at [email protected].