Masks are required on all Motlow campuses as of August 31, 2021. Learn more here. 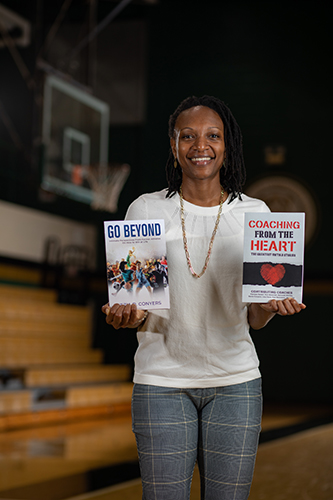 Kezia Conyers is the head women's basketball coach at Motlow State Community College. She is an author of three books, including one set to be released this fall, and one of the top 15 scorers at Appalachian State University (ASU). She came to Motlow in 2019 and was formerly an assistant coach at South Georgia Tech.

“I love what I do because it provides me the opportunity to engage with our future leaders of the world,” said Conyers. “Yes, they are playing basketball. Some of them will become teachers, business owners, lawyers, authors, basketball coaches, song writers, musicians, and so much more.”

There is more to the coach than basketball. Over the years, Conyers has been involved with numerous community service organizations such as Habitat for Humanity, the Spartanburg Soup Kitchen, and the Big Bend Homeless Shelter.

She describes her books as giving a blueprint on how to move forward, including what to do or not to do once an athlete’s playing career is over.

Conyers notes that she had journaled for a few years before she ever wrote her first book. The three published works by Conyers are:

“As I was growing in coaching, I realized that I could positively affect athletes in a different manner,” she said. “The tribulations we go through can be used as a testimony to help someone else. I’m fully aware my position as a basketball coach extends beyond the court. I’m here to assist former and next generation athletes to find success in life after sports.”

“Being here at Motlow has provided me the chance to grow in my profession, learn a lot about myself, and continually connect with an array of individuals,” explained Conyers. “As a head coach, I have learned to always expect the unexpected.”

A native of Tallahassee, Fl., Conyers is no stranger to the game. She played basketball at ASU where she was awarded the Southern Conference Freshman of the Year for 2002-03, the ASU Women’s Basketball MVP for 2004-05, and MVP again in 2005-06. Conyers was also named All-Southern Conference for 2005-06. 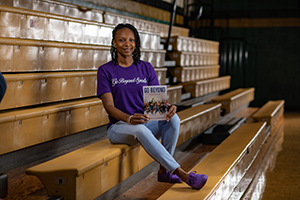 Outside of sports, Conyers enjoys cooking and promoting a healthier lifestyle through proper eating habits.

“I’m in the developmental stages of writing a plant-based cook book,” she explained.

Conyers received her Master's degree in Recreation and Sport Sciences from Ohio University and has been coaching basketball at various levels for more than ten years. She previously was the guard development coach at Tallahassee Community College.  She also was an assistant basketball coach and Intramural Director at Converse College in Spartanburg, SC, as well as assistant coach at Maclay High School and FAMU High School in Tallahassee.

“I never would have thought my life would be an example to others. I'm thankful to be in a position to assist others through sharing my experiences,” said Conyers.

Conyers has a passion for helping athletes recognize that their purpose in life stretches far beyond the athletic realm. To do this, she founded the Go Beyond Sports Network, an organization for athletes, former athletes, coaches, and administrators to share and connect. She wants to use her platform to share her experiences and insight, as well as to motivate athletes to have a plan for life after sports.

“Often times athletes have a hard time adjusting, or figuring out what's next in life after their playing career is over. As a former athlete myself, I understand this journey. I believe it is a part of my responsibility to serve athletes in any capacity I can,” she said. “Everyone's journey is different; the key is to just move forward.”

Conyers will begin her third season as head coach when her Lady Bucks host the UT-Southern junior varsity Nov. 1 at 5:30 p.m. at Copperweld Arena on Motlow’s Moore County campus.